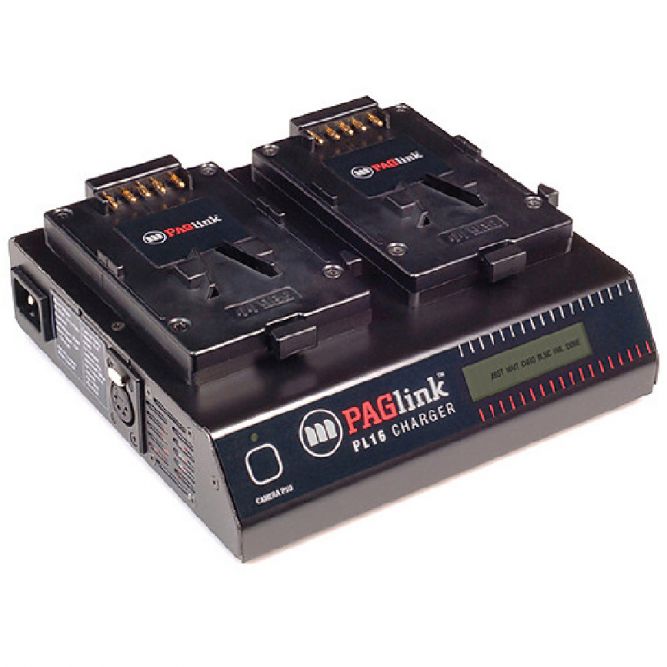 Linked battery charging was introduced by PAG and is unique to the PAGlink system. Now you can charge more batteries on fewer, smaller and more efficient chargers. PAGlink makes location charging easier and reduces the number of chargers required to manage your batteries.

The 2-position PAGlink PL16 Charger is the ideal location charger for PAGlink V-Mount Li-Ion batteries. Up to 16 PAGlink batteries can be charged simultaneously (8 per channel).

The batteries can be of any rated capacity and in any state of charge for linked charging. PAGlink intelligent batteries manage their own charging automatically.

PAGlink means no more interrupted sleep on location, swapping charged for discharged batteries on your charger, just to get them all charged by the morning. At the end of a shoot, simply link your batteries and connect them to the charger. The next day, they will be fully-charged and ready to go.

During charging, the percentage state-of-charge of each PAGlink battery is indicated on its individual display. The battery’s numeric display can be inverted, for legibility, with a single button press, and reverts automatically after removal.

The stages of the charging process for each channel are clearly indicated on the charger’s large backlit LCD screen.

A Recovery Charge Program is included for deeply discharged batteries. Two presses of the charger’s front panel button will enable the batteries to accept charge. Additionally, the charger will automatically reset Li-Ion batteries if their cut-out has been tripped.

The high-power PL16 is capable of supplying 6A at 16.8V (approximately 100W). It can also be used to power your camera from any AC supply worldwide, via the charger’s built-in 100W camera power supply, which has an XLR4 output.

The PL16 is compact, quiet and cool-running, and features a hard-wearing aluminum case. It weighs only 3lbs, and its slim design makes it easy to transport.