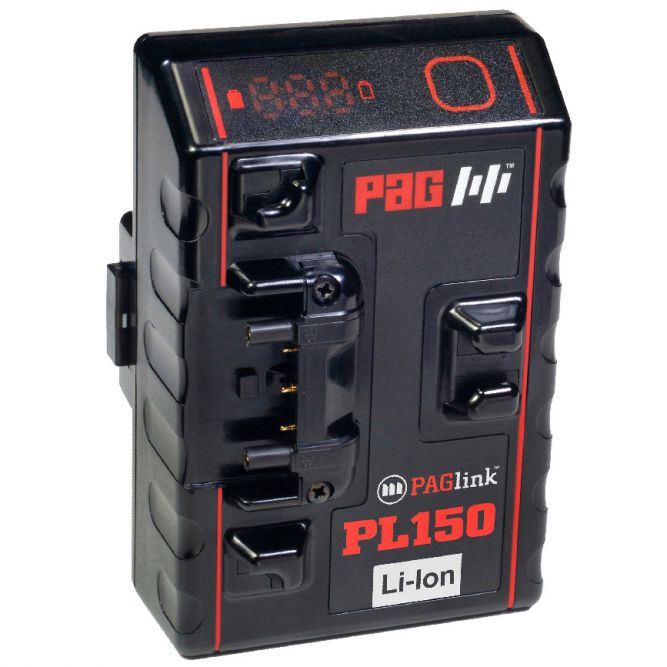 Superior Gold Mount Battery System
The PAGlink HC-PL150T is a high-current replacement for Anton Bauer Li-Ion batteries. The smaller and lighter PAGlink battery is compatible with the Gold Mount camera plate and with Anton Bauer Li-Ion chargers. There is no need to replace expensive chargers in order to benefit from the many advantages of PAG’s revolutionary, intelligent linking battery technology.

The PL150 takes advantage of the latest high-capacity Li-Ion cells in order to provide a greatly increased capacity of 150Wh, in the same enclosure as the PL94 PAGlink battery, and only 40g heavier.

The PL150 is designed for high power-consumption applications, such as a digital cinema camera and multiple accessories. Two batteries can be linked, combining their capacities, to create a 300Wh power source, with a weight of just 1.5kg (3.3lbs) approx.; linking three batteries provides 450Wh; no other system offers as much power.

The rated maximum continuous output for an individual battery is 10A, and 12A when batteries are linked. PAGlink offers more power for set-ups that include multiple accessories. Hard-wearing, heavy duty contacts are incorporated for high-current applications. Linking batteries shares the load and contributes to an extended battery life. No other battery system offers such good return on investment.

The PL150 has a capacity above 100Wh, but below 160Wh, and has an allowance of 2 units per person, in carry-on luggage, when you travel by air. Li-Ion batteries that have capacities greater than 160Wh are banned from passenger aircraft.

The PL150 has been tested to UN standards by an independent authority and certified to comply with air transport safety regulations.

Smaller & Lighter Batteries
As well as being more intelligent, PAGlink batteries are smaller and lighter, with a higher energy density than any Gold Mount system marketed to date.

Flexible Linking
The PL150 can be linked to any other PAGlink Gold Mount battery for charge or discharge, regardless of rated capacity or state-of-charge.

Run-Time & Capacity Display
The battery incorporates a numeric Run-Time & Capacity display, unique to PAG. Remaining run-time is shown, on-load, expressed in hours and minutes, to a resolution of 1 minute. When batteries are linked, the run-time figure is for the entire stack, but a single button press shows individual battery capacity as a percentage of full, in 1% increments. The display maintains its accuracy by tracking the performance, and adjusting calibration values to compensate for the ageing of the cells.