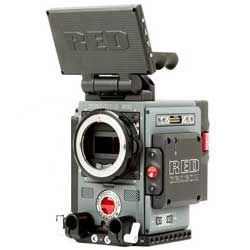 The SCARLET-W fits neatly between the RAVEN and the EPIC-W with a max of 48fps using the entire frame of the 5K sensor. SCARLET-W and RAVEN share the same processor speeds internally (140MB/s), though RAVEN is limited as it has a physically smaller sensor. Both cameras can ultimately top out at 150fps at resolutions below 5K. SCARLET-W is also twice as fast as the previous SCARLET DRAGON, and is capable of 4:1 compression at 24fps, half that of the 8:1 minimum on the SCARLET DRAGON.

There's much more versatility with the SCARLET-W over RAVEN since you can change the lens mounts and the OLPF's (optical low pass filters), something that's just not possible on the RAVEN.

Now available for rental or purchase.